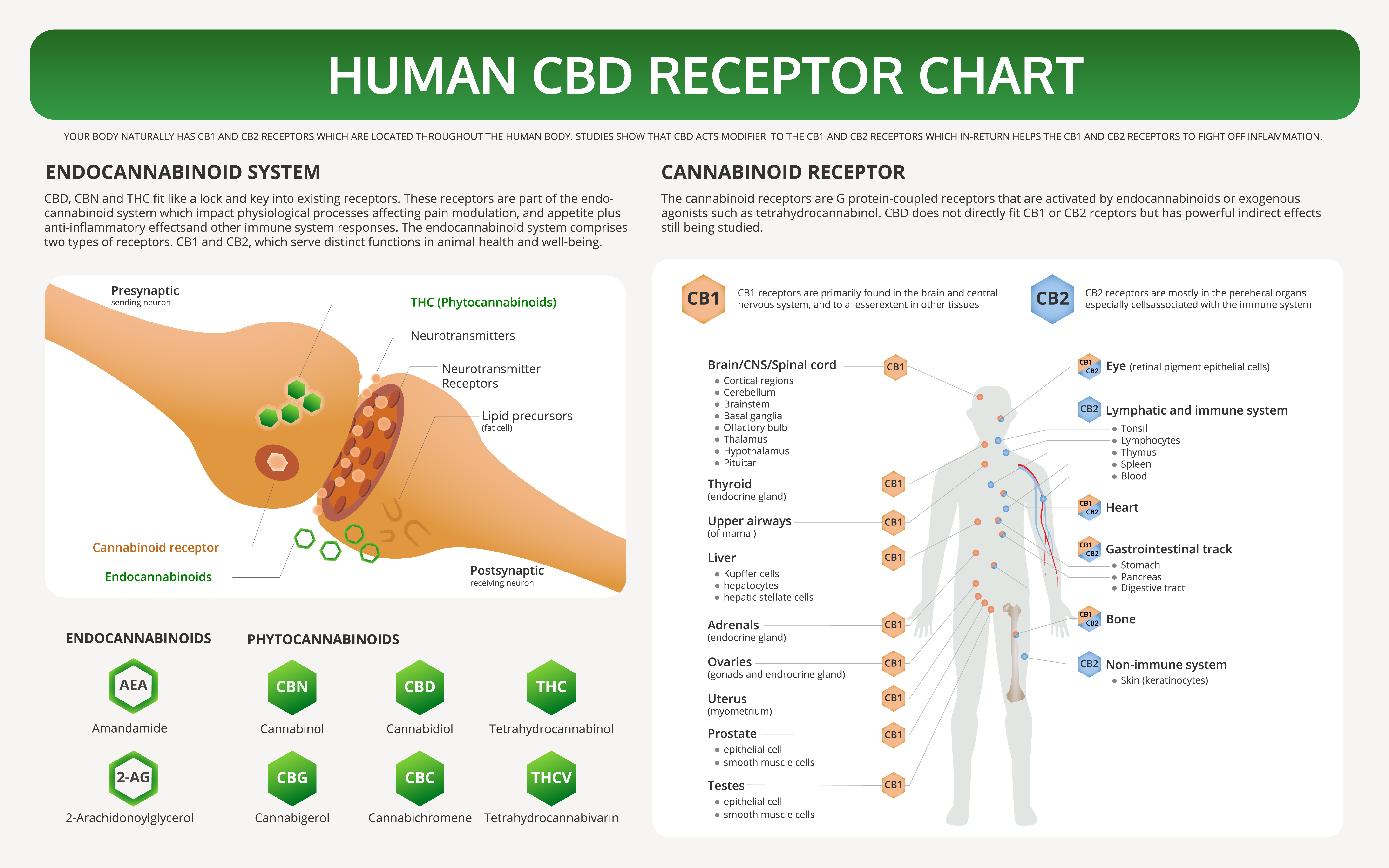 Each chemical signal has a predictable effect depending on cell-type and chemical environment, they are programed to specific functions. There are neurotransmitters such as dopamine and serotonin.The process of cellular communication has two parts, the chemical signals and the receptors. In the ECS, there are 5 relatively well-known endocannabinoids, although 2-AG and anandamide (commonly found in raw chocolate and algae) are the most well-known.

Similarly, when the ECS fails to allow cells to communicate, health problems arise. If there is a problem, but no communication, the problem cannot be addressed.

What is the Endocannabinoid System?

In order to maintain this balance, the endocannabinoid system (ECS) regulates physical and emotional processes like appetite and mood, you can feel your ECS at work all day every day!

It does this with substances called endocannabinoids, which are neurotransmitters. Simply put, neurotransmitters are chemical messengers that one cell releases to instruct another cell what to do. Think of this as your own internal bluetooth network.

The total effect of these commands is called endocannabinoid tone. Tonic systems in the body have dual directions meaning they can increase or decrease depending on what your body requires in each specific moment.

Researchers discovered the endocannabinoid system while researching the effects of THC; THC is the compound found in cannabis which causes the psychoactive effects (the high) associated with marijuana, when hemp is grown and processed into CBD products these THC levels have been bred to be insignificant and have to psychoactive effects.

THC is not the only thing that affect the ECS, researching and finding more and more foods, herbs and compounds that influence this. Proper nutrient support of the ECS results in homeostasis: a healthy state of balance within our body. This is why we call our company DaoZen. We aim to support the body system in seeking homeostasis.

What is endocannabinoid deficiency?

When the ECS becomes overactive or underactive, then the endocannabinoid tone can is not in homeostasis.

If the ECS is not in balance, systems of the body begin to malfunction. This condition is called Clinical Endocannabinoid Deficiency (CECD).

CECD leads to many common health problems that seem to arise without cause.

CECD occurs when your body loses the ability to maintain a healthy endocannabinoid tone. This can be caused by a variety dietary and lifestyle factors, or potentialy other disorders. Cannabis plants produce compounds called phytocannabinoids, which interact with our endocannabinoid system to promote balance and make sure those all important messages are being communicated from one area of the body to another. Below is an overview of the endocannabinoids that have been discovered so far, and what we know about their activities and responsibilities. This is an area that is being studied more and more everyday.

Anandamide, also known as AEA , was the first endocannabinoid discovered k in 1991. The word anandamide comes from the sanskrit word for bliss: “ananda”. When you have high levels of anandamide you feel a blissful sense of being. People when falling in love have been researched and shown to have elevated levels of anadamide, its what give us that floating euphoric sense of connection and love.
Anandamide is a partial agonist of CB1 receptors, which are found in the central nervous system. It’s a weaker agonist of CB2 receptors, which are found in the periphery and immune system.
An agonist is any chemical compound which activates a given receptor.
In the case of anandamide, it binds to and activates CB1 and CB2 cannabinoid receptors. However, it only partially activates them. It’s about 40% as potent as 2-AG at cannabinoid CB1 receptors.

2-AG, or 2-arachidonoyl glycerol, is another major endocannabinoid in addition to anandamide. It was discovered after anandamide so it’s less-commonly known, but 2-AG’s role is equally important.

Unlike anandamide, 2-AG is a full agonist of CB1 and CB2 receptors. For some context, 2-AG is strongly associated with the feeling of a “runner’s high,” the endorphin rush and the sense of euphoria reported by athletes following intense workouts.

In 2002, another endogenous compound with activity at cannabinoid receptors was discovered: virodhamine. It has the same chemical formula as anandamide, but its effects are slightly diminished.

Researchers believe this is just one of the many regulatory mechanisms innate within the endocannabinoid system: virodhamine limits the effects of the stronger endocannabinoids in a process called competitive antagonization.

2-Arachidonyl glyceryl ether, 2-AGE, or simply noladin ether, is an endocannabinoid that was discovered in 2001 by a team led by Raphael Mechoulam, the scientist who discovered THC and many other phytocannabinoids (plant-derived cannabinoids).

2-AGE is an agonist of both cannabinoid receptors, although it has ten times the affinity (attraction) for CB1 receptors compared to CB2. For this reason, it acts as an agonist at CB1 receptors, but has the net effect of reducing the activity of CB2 receptors, by competing for spots at the receptor with stronger agonists.

In addition to the classic CB1 and CB2 cannabinoid receptors, 2-AGE also binds to the PPAR receptor, which controls how genes get expressed in brain cells.

In 2000, NADA was discovered as an agonist of CB1 receptors and TRPV1 receptors, but not of CB2. It is 40 times more attracted to CB1 than CB2, and it’s the body’s primary endogenous TRPV1 agonist.

TRPV 1 receptors are located on sensory nerves and they react to chemicals that are painful to touch. NADA competes with these painful chemicals for a spot at the pain receptor, but it doesn’t cause a pain response. NADA protects us from chemical pain by blocking the receptors where the pain would be registered.

NADA is the combination of arachidonic acid, found in all endocannabinoids, with dopamine, one of the brain’s primary neurotransmitters. It is the strongest endogenous CB1 agonist, and it can also be applied as a dietary supplement.

What Are Cannabinoid Receptors?

In biological organisms like humans and cannabis plants, long chains of DNA (deoxyribonucleic acid) are included in every single cell. DNA is shaped like a twisting ladder, but instead of 10 or 20 rungs, the DNA ladder in each of your individual cells has about 3,000,000,000 (billion) “rungs”, or base pairs.

The order of these base pairs determines our genes, and our genes work by getting turned into one of over 50,000 different proteins which each have a distinct and important purpose. Proteins are the “machines” which carry out all of the different processes within our cells. They are classified by their purpose.

Receptors are a class of proteins which become embedded in cell membranes: they’re called membrane-bound proteins. This is key to their function, because part of the receptor is exposed to the outside of the cell, while the rest resides within the cell.

Cannabinoid type 1 receptors (CB1) are found in the brain and central nervous system of all mammals. This receptor was first discovered as researchers sought to decode the effects of THC, the main psychoactive ingredient in marijuana. It was found that Δ9-THC potently binds to CB1 receptors, and thus mimics the effects of the endogenous cannabinoids.

Although it was only recently discovered, the importance of CB1 in the central nervous system is demonstrated by the fact that there are more CB1 receptors than all other receptors, combined: more than half of all receptors in your brain are cannabinoid receptors.

When activated, CB1 receptors drastically reduce the activity of important cellular processes that are required for the core functionality of cells. Importantly, these core processes are repeated in many different types of cells, so the endocannabinoid system is able to use the same mechanism to control the activity of drastically different types of cells.

Cannabinoid type 2 receptors (CB2) are primarily concentrated in the immune system of mammals as opposed to the concentration of CB1 receptors in the CNS. CB2 receptors are only 44% identical to CB1 receptors, but they have nearly the same cellular purpose, the primary differences being the type of cell which expresses them and the specific compounds which activate them.

Similar to CB1 in the brain, CB2 is one of the most abundant receptors in immune tissue. Furthermore, CB2 activity is impacted in many disorders of immune origin. Researchers believe this correlation is responsible for at least some of the therapeutic properties of the phytocannabinoids which interact with CB2 receptors.

As a cannabinoid receptor, CB2 inhibits the activity of fundamental processes which many different kinds of cells use to carry out their core function. The core functionality of immune cells (B cells) is to recognize specific chemical markers of injury or infection – called antigens – and activate “soldier” or “doctor” cells (T cells) by releasing chemical messengers known as chemokines.

CB2 activation reduces the ability of B cells to produce chemokines.

It also raises the threshold amount of chemokines required to “activate” the T cells, which create inflammation and can subsequently harm healthy tissue if not properly balanced and regulated by processes like CB2 activation.

Another receptor, the ultimate function of which is not entirely clear, but the existence of which has been known for decades, is the GPR-55 receptor. It is found throughout all tissues, and it appears to have a role in mediating “soreness”, or pain caused by the activation of immune cells.

Aches and pains associated by a workout or a moderate cold/flu are not actually caused by these things. Rather, the immune response to muscle damage or an infection like the flu causes the release of compounds which activate pain receptors on sensory nerves. It is thought that GPR-55 is one of these receptors, and cannabinoids regulate pain by competing with the painful immune chemicals for a spot activating a GPR-55 receptor.

In addition to CB1, CB2, and GPR-55, other kinds of receptors respond to and interact with endocannabinoids and plant cannabinoids. The discovery of additional receptors that operate within the endocannabinoid system continuously expands our understanding of how the ECS works.

Peroxisome Proliferator-activated receptors (PPARs) control the expression of genes depending on cell-type. They are implicated in cancer growth and activation of immune cells. Endocannabinoids interact with PPARs to modulate the expression of certain genes based on the requirements of the cell’s environment.

Transient receptor potential vanilloid type 1 receptors (TRPV1) are found on sensory nerves throughout the peripheral nervous system. TRPV 1 receptors recognize both high temperatures as well as chemicals that “burn”, like the primary compound responsible for the taste of chili peppers: capsaicin.

They are an instrumental part of human pain perception, and endocannabinoid regulation of TRPV1 is a negative feedback mechanism which maintains the sensitivity of this receptor by competing with painful stimuli for spots at TRPV1 receptors, a process called competitive antagonization.